The Magical Kingdom of Books

My family and I returned on Saturday from a week in Orlando, FL. My boys turned 11 last week, and we’ve been eager to try out the campground at Disney’s Fort Wilderness, so my husband and I decided this would be a good opportunity to visit several of the theme parks in that area—something we’d not done since Will and Ben were 5 years old. We had a fun, busy week, but we were all happy to get back home!


As we explored the parks, I was struck by how many areas and attractions were inspired by books. I’d been to several of the parks in the past but had never really thought about this before. On this trip, I caught myself thinking—over and over again—this all came about because ONE author had an idea.
At the Magic Kingdom, my family and I explored the Swiss Family Robinson’s tree house, created by the imagination of Johann Wyss, whose book THE SWISS FAMILY ROBINSON was first published in 1812. And while my husband and Ben braved more “high action” rides, Will and I traipsed through Tom Sawyer Island, based upon Mark Twain’s THE ADVENTURES OF TOM SAWYER, first published in 1876. 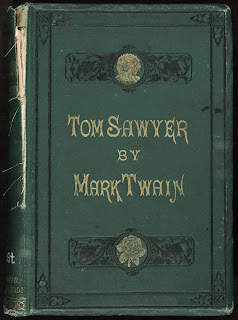 At Universal Studios, we walked by a play area inspired by the CURIOUS GEORGE books, written by Margaret and H.A. Rey, and we played in streets inspired by superheroes and “Sunday funnies” cartoons, reminding me of the graphic novel genre which has become so popular. At Universal’s Islands of Adventure we explored Seuss Landing, a colorful, fantastical world based on the works of Theodore Geisel, better known as Dr. Seuss. We also ventured into Jurassic Park, based on the 1990 book of the same name by Michael Crichton, which was made into a movie in 1993. Of course, our visit to The Wizarding World of Harry Potter, inspired by J.K. Rowling’s HARRY POTTER series, was the ultimate experience in blurring-the-line-between-fiction-and-reality—for avid Potter fans like my boys and myself, it was a truly amazing experience to suddenly BE in that world (and taste the butterbeer—yum!).


There are several more examples that I could draw upon from our trip, but I think I’ve made my point—each of these beloved attractions exist because ONE author had an idea. And after he got that idea, he sat down and wrote it out, laboring one word at a time (and in many cases without the use of a personal computer).
As I told my boys one day during our trip, authors have the power to change the world. To write something, and then one day have your make-believe “world” become a reality—whether that reality is figurative or literal—is truly impressive. And when you take a step back and consider all of the wonderful, amazing books that don’t become theme park attractions, this idea becomes even more incredible; so many books I’ve read have sucked me into imaginary worlds that were *just* as real as those I visited last week (and they cost much less!). The collective existence of books really is a “Magical Kingdom” that can take us anywhere the author chooses to lead. As authors, what greater privilege is there?


Have a great week, and Happy Writing! ☺
Posted by Becky Shillington
Email ThisBlogThis!Share to TwitterShare to FacebookShare to Pinterest
Labels: authors, books, writing