Thanks to Jone at Check it Out for hosting Poetry Friday this week!


* * * * *
Wednesday, April 1st marks the beginning of this year’s National Poetry Month! I look forward to April each year and the poetry-related festivities that abound throughout the month. It is a wonderful time to revisit familiar poems and poets, discover new favorites, and celebrate poets and poems around the world.
Each year, the Academy of American Poets publishes a poster to promote National Poetry Month. I absolutely love this year’s poster, which was designed by Roz Chast and features a line from Mark Strand’s poem, “Eating Poetry”: 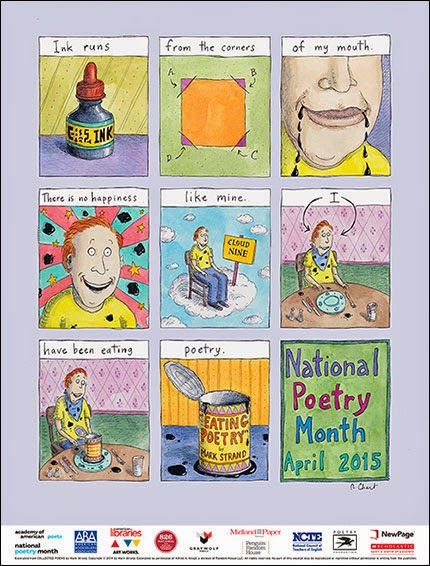 Here are some great resources to help celebrate this year’s National Poetry Month:
The Academy of American Poets


During National Poetry Month this year, I plan to explore “new to me” poems and poetic forms. How will YOU celebrate? Happy Writing!
Posted by Becky Shillington 3 comments:
Email ThisBlogThis!Share to TwitterShare to FacebookShare to Pinterest
Labels: 2015 National Poetry Month, Poetry Friday

Thanks to Laura at Author Amok for hosting Poetry Friday this week!


* * * * *
For Poetry Friday today, I wrote a haiku to celebrate spring’s long awaited arrival in my little corner of the world. Just in the last week, blooms have begun to peek out here and there, and birds are suddenly everywhere. We’ve had a few false starts lately, though, so I hope spring is here for real this time! 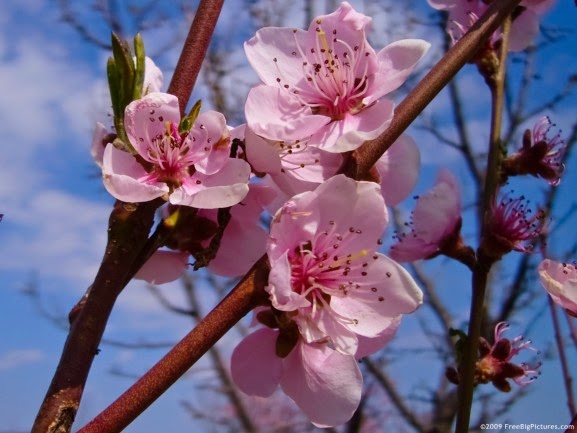 Any day now, the first peach blossoms will pop out around here. I look forward to this every year!
Thanks to FreeBigPictures.com for this beautiful image.


I hope you’re enjoying YOUR first taste of spring, as well! Happy Writing!

My poor little blog has been a bit neglected over the last month or so, but I have been busy writing, revising, reading, and playing catch-up on several different projects. I can’t believe it is already mid March! Time really does fly…


Since I’ve returned home from France, several friends have asked for my top three impressions from my trip. Just for fun, I thought I’d share them here (I promise—all of this does have something to do with writing☺).


First of all, I have decided that everything tastes better in France! Seriously, EVERYTHING—from simple bread and butter to meals made with super fresh ingredients straight from the butcher, bakery, or farm. I enjoyed lots of great food while I was away, but one of my favorite meals was the Beef Bourguignon that my friend’s husband made for dinner one night. It was amazing! When I got home, I tried my own version. It was good, but still not as good as what I had in France (click here for an easy Beef Bourguignon recipe). Paired with fresh bread and a good French wine, it was one of the best meals I’ve had in a long time!

Another culinary highlight was our lunch at a Creperie in Arras. 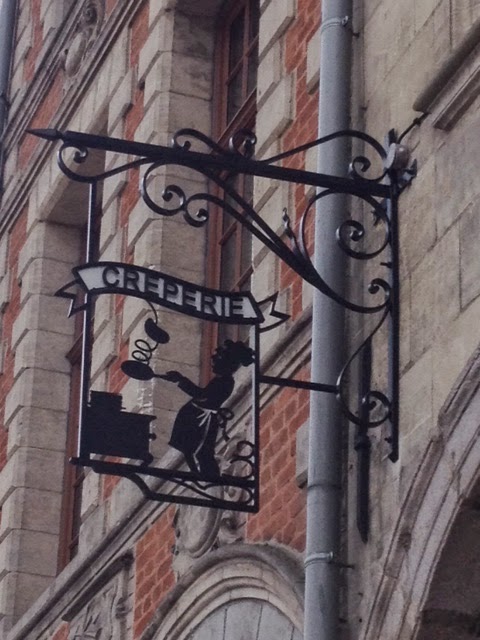 Here I enjoyed a galette (an open-faced buckwheat crepe made with meat and other ingredients) and a wonderful apple cinnamon dessert crepe topped with ice cream and whipped cream. The cappuccino was amazing, as well. Doesn’t this look like the perfect afternoon treat? 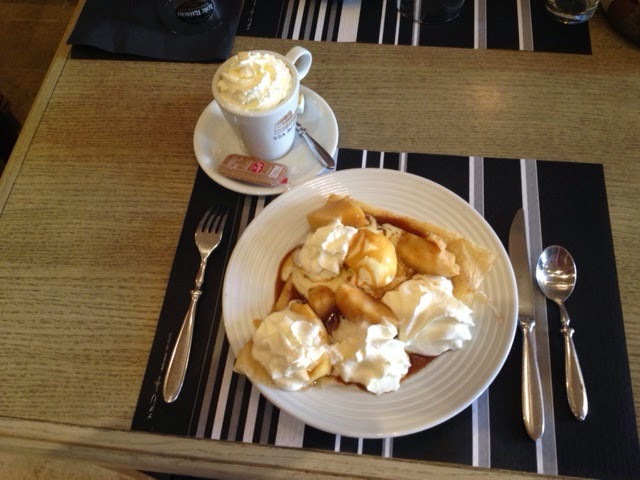 Another thing that I realized during my trip is there is so much I did not know about the history of northern France, WWI, and WWII. I went through high school and college as a mostly-straight-A student, and thought that I at least knew the basics of French history. I’d also traveled abroad to Europe during college and learned quite a bit then. But it was on this trip that I learned the most about northwest France’s turbulent and often bloody history. 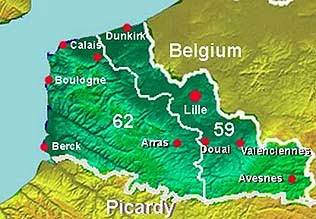 The Nord-Pas-de-Calais (northwest region of France) is bordered on the north by the English Channel and the North Sea, and on the northeast by Belgium. In the south it is bordered by France’s Picardy region. The Nord-Pas-de-Calais encompasses what was once the French part of Flanders, and the old province of Artois. Historically, it has been one of the most coveted sections of land in Europe, and over the years has been fought over by the French, the English, the Austrians, the Spanish, the Dutch, and the Germans, just to name a few. During World Wars I and II, this region saw many bloody battles. Driving around the French countryside, I saw many bunkers, cemeteries, memorials, and even bomb-cratered areas of land that remain as reminders of lives lost. World Wars I and II are not just historical events here, but are still very much a part of the collective memory of this area. 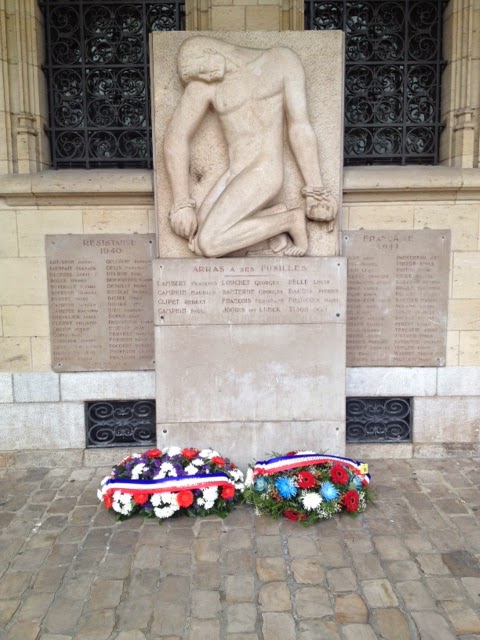 A memorial to fallen soldiers in Arras, France, with fresh flowers.

I enjoyed exploring many of the towns in this area, including Boulonge sur Mer, Lens, Arras, Calais, and the tiny fishing village of  Audreselles, where I stayed. From the beach down the street from my friend's house, you can just catch a glimpse of England's White Cliffs of Dover across the English Channel. 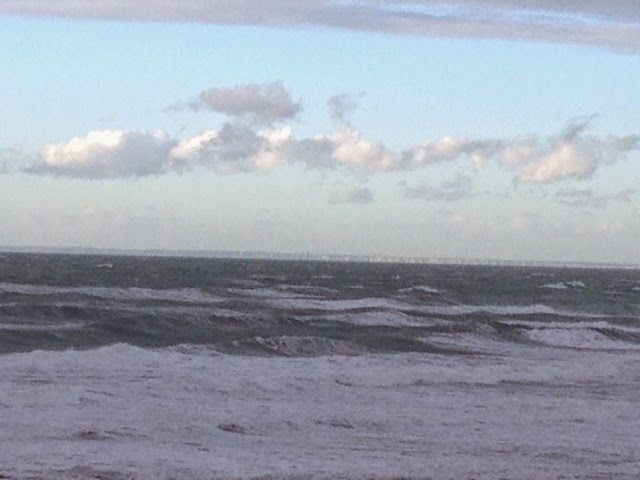 You can just barely see them here...

On this trip, I was reminded once again that the world really is a BIG place, and our individual experience is just a little tick on history’s clock.

I read an interesting fact a few weeks ago: If the history of Earth were compressed to a single year, modern humans would appear on December 31st at about 11:58 p.m. (To read more about this and other interesting time-related facts, click here.)

There is so much more than what we personally know and experience, which is easy to forget in our hectic lives where everything seems so immediate and important. Traveling to new places always reminds me of this, especially when the site I’m visiting is rich in history and has a story behind it, which includes just about everywhere I visited during my trip. 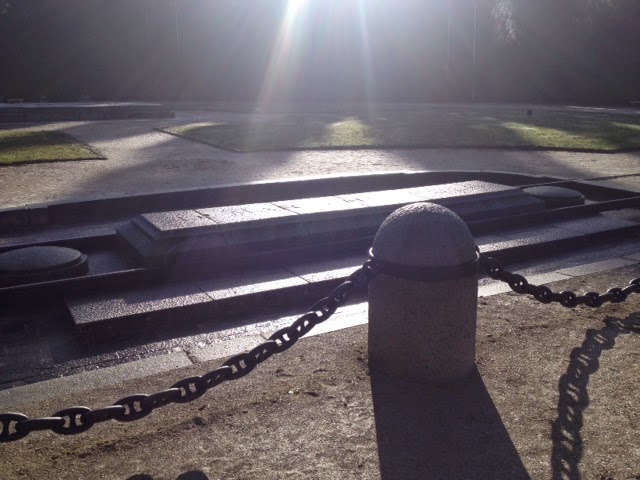 An impromptu stop along our route to Paris towards the end of my visit was one of the highlights of my trip. This explains it better than any words of mine ever could... 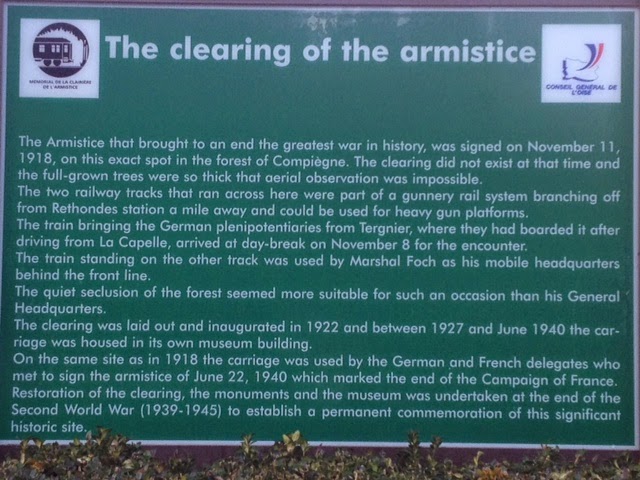 So what does all of this have to do with writing? Just that every story we write, every poem we compose, every single line is born out of how we experience our world. Whether this experience comes through research, reading, or travel, it plants tiny seeds of inspiration that have the potential to grow into future poems, plots, and characters.

I am not exactly sure what will come of this for me, but I suspect that somewhere down the line I'll find out. The seeds of inspiration have definitely been planted!