POETRY FRIDAY: Rilke’s Sonnets to Orpheus and a Unicorn Haiku

Growing up, I had a fascination with unicorns. The mythical beast called to my young girl’s heart, and I think, for awhile at least, I let myself believe they were real.


Maybe this is why the following excerpt from Rilke’s Sonnets to Orpheus so captivates me. I discovered this work last year while researching a new book idea. The book is still “percolating,” but will eventually find its way to paper. There are several translations of Rilke’s Sonnets, but I particularly like this translation by Robert Hunter. I hope you enjoy it, too!

O this is the beast who does not exist.
They didn't know that, and in any case
--with its stance, its arched neck and easy grace,
the light of its limpid gaze --they could not resist

but loved it though, indeed, it was not. Yet since
they always gave it room, the pure beast persisted.
And in that loving space, clear and unfenced,
reared it's head freely and hardly needed

to exist. They fed it not with grain nor chaff
but fortified and nourished it solely with
the notion that it might yet come to pass,

so that, at length, it grew a single shaft
upon it's brow and to a virgin came
and dwelled in her and in her silvered glass. 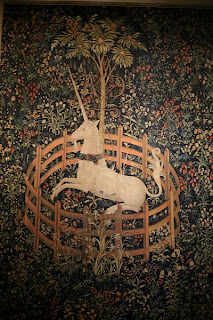 The Unicorn is in Captivity and No Longer Dead
This famous tapestry hangs in the Metropolitan Museum of Art.

I must still dream of unicorns sometimes, because I woke up one morning recently with a unicorn haiku “written” in my mind. This is one of the reasons why I love writing for kids so much, and why I stubbornly cling to my goal of publishing a children's book one day—it lets my inner child come out to play! Here is my unicorn haiku, short and sweet:

Thanks to Jone at http://maclibrary.wordpress.com for hosting Poetry Friday today, and Happy Writing!
Posted by Becky Shillington at 12:01 PM