Thank you to Liz Steinglass for hosting Poetry Friday this week!
* * * * *
I have been busy writing and revising lately, and it has been way too long since I’ve posted. But I wanted to jump back into Poetry Friday this week to talk about American poet Henry Wadsworth Longfellow, who was born on February 27, 1807. 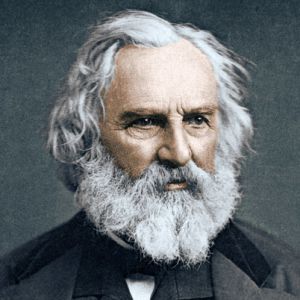 Longfellow is the author of many well-loved poems, including one of the first poems I ever memorized as a child:

There was a little girl,
Who had a little curl,
Right in the middle of her forehead.
When she was good,
She was very good indeed,
But when she was bad she was horrid.

Longfellow also wrote another one of my favorite poems, The Landlord’s Tale. Paul Revere’s Ride, which I read every year to my third graders when I was a teacher. Although not 100% historically accurate, the narrative of the poem captures the urgency and spirit of this moment in America's collective consciousness. The cadence and atmosphere is spectacular, and it is always such a joy to read aloud. Here is the opening stanza:

Listen my children, and you shall hear
Of the midnight ride of Paul Revere,
On the eighteenth of April, in Seventy-five;
Hardly a man is now alive
Who remembers that famous day and year.

He said to his friend, "If the British march
By land or sea from the town to-night,
Hang a lantern aloft in the belfry arch
Of the North Church tower as a signal light,—
One, if by land, and two, if by sea;
And I on the opposite shore will be,
Ready to ride and spread the alarm
Through every Middlesex village and farm,
For the country folk to be up and to arm."
To read the rest of this poem, click here.

Thanks for stopping by to celebrate Henry Wadsworth Longfellow’s birthday tomorrow! Have a wonderful weekend, and happy writing!