I had originally planned a different, more upbeat post for today titled "Stranger than Fiction," where I was going to talk about how sometimes life's realities are so much more_________than anything we could ever dream up as writers. (You can fill in this blank with a variety of adjectives: amazing, beautiful, serendipitous...tragic, horrific, terrifying, etc.)

But then yesterday's events at the Boston Marathon occurred. As the news unfolds today we are witnessing the heartbreaking realities of a truly tragic, horrific, and terrifying event that is almost too awful to believe. I added the "almost" here because of all of the other horrifying events that our country has dealt with in recent years. The collective memory of our nation includes some devasting events. Today is also the 6th anniversary of the Virginia Tech shooting, another senseless attack on innocent people, and I know of several people who are keeping those victims in their hearts and prayers today, too.

So I will save my originally planned post for another day, and keep everyone who was touched by these tragedies in my prayers and close to my heart today. I will be thankful that my friend and neighbor who completed the Boston Marathon yesterday arrived safely home last night along with her husband and two young children, who were there to cheer her on. And I will be thankful that my cousin who is a professor of music at Virginia Tech escaped the violence on April 16, 2007.

And I will pray for peace. 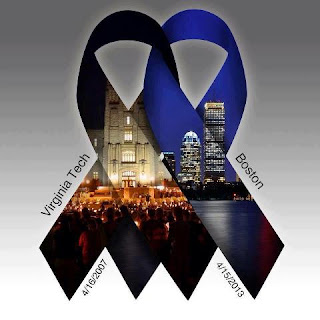